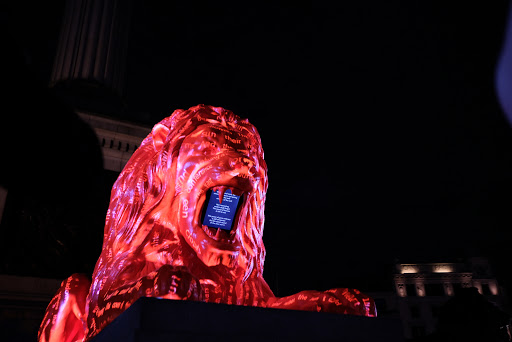 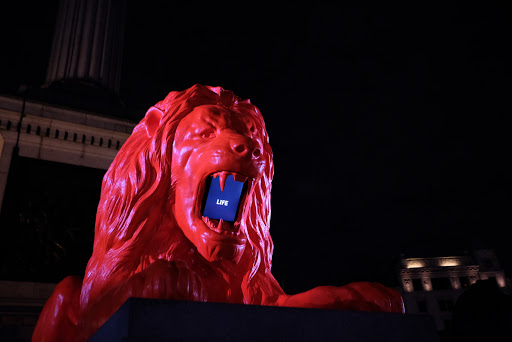 Cast in 1867, the four monumental lions in Trafalgar Square have been sitting silently at the base of Nelson’s Column for the past 150 years. Overnight on Monday 17 September, a fifth fluorescent red lion joined the pride, facing northwards towards the National Gallery. This new lion is not silent: it roars poetry, and the words it roars are chosen by the public. Everyone is invited to “feed the lion”, but this lion only eats words.

By daylight, the ever-evolving collective poem is shown on LEDs embedded in the mouth of the lion. By night, the poem is projection-mapped over the lion and onto Nelson’s Column itself: a beacon of streaming text that invites others to join in and add their voice.
The project follows a year-long collaboration between Es Devlin and Google Arts & Culture. Exploring the parameters of design and artificial intelligence, the installation incorporates a deep learning algorithm developed by Ross Goodwin, creative technologist at Google. Following the Festival, the sculpture will be digitised as part of an online exhibition on Google Arts & Culture so people all over the world can experience the groundbreaking artwork.
Devlin says the idea for the sculpture was prompted by a walk through Trafalgar Square with LDF Chairman Sir John Sorrell during last year’s Festival. “He said: ‘Landseer never wanted those lions to look so passive; he proposed a much more animated stance, but Queen Victoria found it too shocking.’ The thought lodged in my mind. What if we could invest the lion with a diversely crowd-sourced collective poetic voice?”
Submitting...
Saving...